Why Do People Play Music on the Streets? 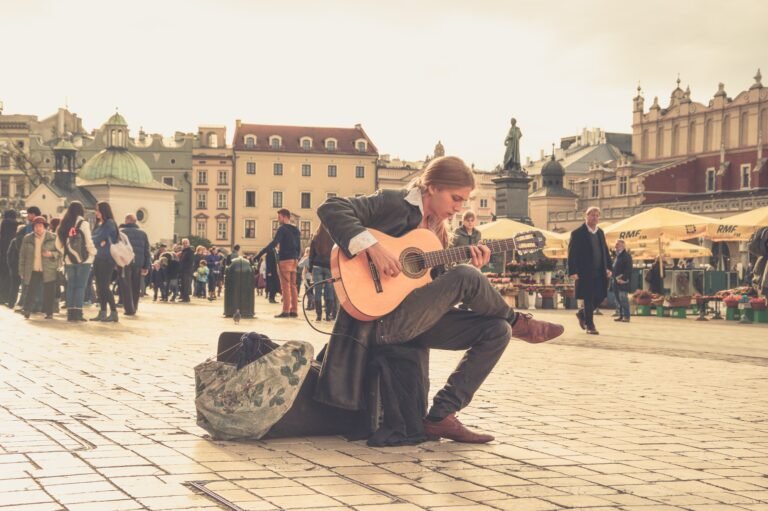 How often have you walked straight past a soulful singer strumming a guitar in the town centre? A lone violinist bringing a tender classical repertoire to life? The miracle of what these brave souls create is too often lost in a world where ‘music’ is everywhere.

And they are brave souls. When you speak to buskers, you quickly discover they’re hardened by necessity. Frequently absorbing jeers and constant requests, battling with others on the street, and often lumped in with the ne’er-do-wells.

Occasionally stolen from, yet always graceful, always sincere and uplifting. They don’t necessarily do it for the money, but we all need money to live.

A busker doesn’t ask for money, doesn’t beg. They provide a portal to infinity. They create moments out of thin air and they conjure beautiful sonic backdrops for our urban areas. If there were no music on the streets, surely the heart of the city would cease to beat with such vibrancy. With such overwhelming excitement for the possibilities that these concentrated zones of human invention and interaction can produce. Music is part of the city buzz, pouring out of cafes and bars, mingling with the sound of traffic and energetic conversation.

Why do musicians busk on the streets? It can be for many reasons but primarily musicians live to play music. Conventionally gigs are held during the evenings. Quieter, acoustic acts can find daytime gigs at coffee shops and in tourist areas, but these are in short supply.

A musician may not be able to perform at full volume in their home. Busking is half performance, half practice. A opportunity to earn some spare change while honing ones craft. And for a full-time musician: something to do during the days while waiting for the evenings gig.

At every level, even the very top, we find professional musicians dedicating hours to their craft each day to stay fresh and on form. Music, like fitness, is not something we can complete. We must engage with it in order to maintain a standard.

Busking is the ultimate trial by fire. Passers-by have not requested or invested anything in your performance. They haven’t asked or expected to see you play. If you can capture the attention of a complete stranger while they are engaged in something else, then you have something truly special.

I Can’t Give You The Time of Day

Being a busker isn’t easy. You are playing unsolicited music to complete strangers. Reactions can range from complete indifference, through mild hostility and into full-blown infatuation. A band can hold the attention of passers-by for a good ten minutes, or be completely ignored.

If follows that an audience is more likely to be receptive outside of the workday. Weekends are a good time for buskers to play because their audience has a less strict agenda outside of the 9 to 5. They are more likely to stop and listen. During the week, office workers are likely to have more pressing things on their mind. Shoppers are concentrating on their purchases.

Music is connection, but connection doesn’t always need to be perfect to be effective. Seek to become good at expressing yourself and lifting the spirits of others, then fame won’t even matter.

Buskers don’t have fancy production, rarely is their equipment new or top-of-the-line, but the performances they deliver are sincere and from the heart. They can boost spirits and change a person’s day for the better.

Musicians looking to trial new songs, develop their craft, or simply to practice in front of an audience take the streets, in all weathers, and perform for free.

A person doesn’t take to the street looking for fame. They are seeking connection.

Why do people busk?

When music is in your veins, you have no choice but to play. You know you have something you are duty bound to share with others.

Why do they play music in shops? Has music being everywhere reduced the value of the busker on the town centre streets? A busker is not homeless or necessarily even poor. They play music because they were put on this earth to play music. Because if they don’t express their feelings through songs, they climb the walls. They perform because that’s why they are here.

Creating and sharing real feeling on demand is no easy task. There is a reason shops rely so heavily on recorded music: it’s cheap and consistent. A shop can purchase a Spotify subscription for £9.99 per month and have access to most of the music in the known universe. To pay a musician to perform each day in the shop would be at least 10x as expensive, out of the budget of most retail establishments.

Doing It For The Money?

Playing music on the streets is hardly a lucrative career. The money a busker can make is entirely dependent on their location and the time of day they are performing.

Unlike a set gig, you can in theory busk for as long as you want. A gig may only provide you with 30-90mins of playing time. However, during that time, your audience is literally captive. They have come to see you play, they don’t have anywhere else to be. You are condensing all your special musical moments into that timeframe.

Playing on the streets requires a different approach. You could have a special music moment and no-one be there to witness it. You might endlessly cycle a chorus or an entire song because no one will ever notice.

Finding a place where people have to stop or naturally wait for a period of time seems to be a successful practice. Setting up by a bus stop or a set of traffic lights means people will be waiting for some time and will gradually become more aware of the music you are playing.

On The Way to Wembley

Spare a couple of pounds to enjoy their heartfelt performance today, because tomorrow you might be paying £60 a ticket just to hear the same songs. Musicians are some of the humblest people in the world. Don’t be fooled by their timidity, it is borne out of a reverence for the universe. Put them on stage and they’ll remind you why you’re here. Remind you what’s worth fighting for, remind you how to feel real feelings. Remind you to be yourself.

So next time you see someone on the street playing music. Remind yourself they’re not doing it for the money, they’re doing it because they have to. Because to not play music just isn’t an option. So give them a moment of your time, let them lift your spirits and spare them some change for the freedom they offer you. 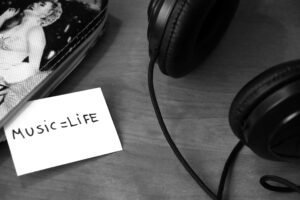 Bringing Live Music Back to the Living Room

In today’s world, music is everywhere. We hear it in shops, at events, in films and television shows. We have access to the wealth of the world’s music in the palm of our hand. But how much of this music is live? How much of it is actually alive? Live Music. Dead Music? Live music